Bougainvillea – Plant of the Month June 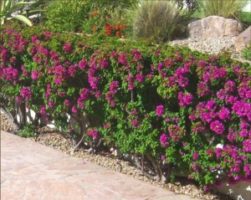 Bougainvillea (part of the Nyctaginaceae family), sometimes referred to as bougies are Native to South America, but do extremely well in our climate. Although frost sensitive they are incredibly hearty and can recover even when they look hopelessly burned by cold. Just prune them back after all danger of frost has past, you should see new growth fairly quickly after pruning.

Plant in a location where they will be at LEAST five hours of sun a day. They will grow in areas with partial shade but, the less sun they receive, the less color they will produce. 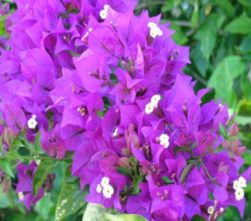 Bougainvillea come in white, fushia, orange, purple, light pink and white. Don’t be afraid to prune aggressively when needed, this plant can take it. Just be sure to wear long sleeves and gloves as these plants are thorny.

They can be purchased in vine or bush form. There’s also a variety called Torch Glow that produces color along cane like branches. Torch Glow is outstanding in its natural form, but also can be trained into more formal and colorful hedge as shown in the first picture. 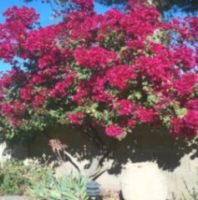 Bougainvillea have a rest cycle in between bloom periods, but bloom year round. Oddly enough the flower is not the showy part of this plant. It’s the bracts that turn color and put on the show. The flower is small, white or off white, and located in the middle of the bract as shown in the 2nd picture.

Overfed and over-watered Bougainvilleas produce an abundance of green foliage at the expense of the colorful bracts. After planting fertilize early in the plant’s second spring. After that, if it is vigorous and colorful, feed no more than once every other spring. The exception being potted Bougies. As with all potted plant material, a regular fertilization program should be followed for best results.

Thinning of canopies prior to Monsoon Season helps wind pass through decreasing the chances of breakage or trees going down..

*Must be in our Service Area. One coupon per customer. May not be combined with other offers. Expires 7/31/2013.